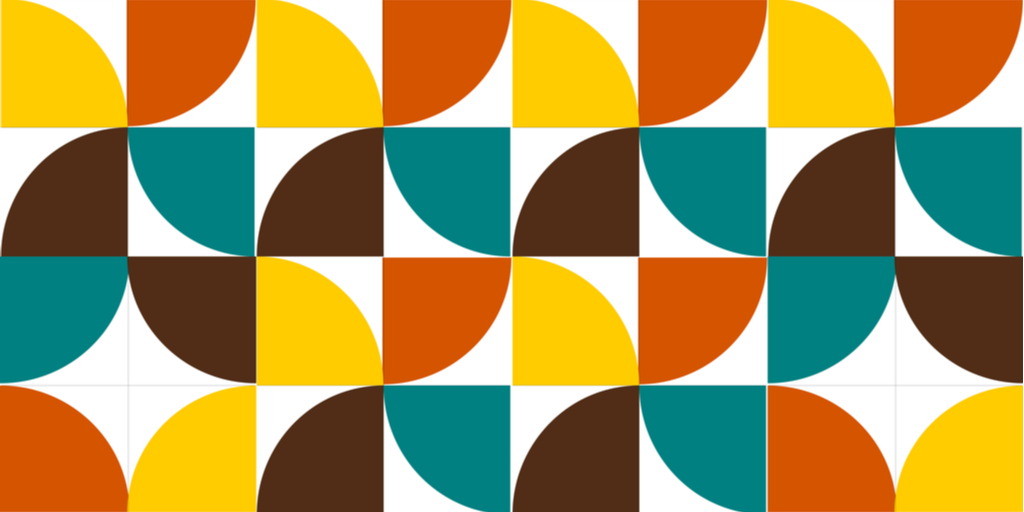 Once Mid Century Modern enthusiasts find their favorite simple furniture and the neutral colors that provide the backdrop to these pieces, they finally get to the lively part: fabrics!

On the other hand, some homeowners and designers fall in love with a fabric and coordinate the furniture, paint and even abstract art around it.

However you start, know that we salute your reserve in designing rooms in the simple, often minimalist Mid Century Modern style. Luckily, when it comes to fabrics, you can go wild!

Wild in Mid Century Modern fabrics looks like this:

Of course there are hundreds of patterns that fabric and textile designers of the 1950s and 1960s created. Knowing their motivations for jazzing pillows, wall and floor coverings with abstract, futuristic patterns helps you choose the pieces that express your style and values fully.

Mid Century Modern Fabric and Textiles: How Did They Get So Crazy?

With the modern fine artists like Picasso, Duchamp and Pollock emphasizing color, pattern and shape over realistic depiction of subject and scene, it makes sense that fabric design would follow.

The fabric designers of the time believed printed fabric for the modern interior should be functional, futuristic and appealing. Their stylized and geometric or free form shapes, bold colors and unique combinations of those colors mimicked not only the period’s artistic trends, but the goals of its architects as well.

One of the most influential fabric designers of the time, Alexander Girard, explained that any realism in printed fabrics should be avoided because draped fabrics distort any image. He also stressed that fabric design should be used to express individual personality, rather than status or wealth. (You can read all about the social values of the Mid Century Modern creatives here.) Girard was one of the first to express that textile choices communicated modern, individual identity.

Colors – While most fabric designs can be wild as described above, sometimes designers choose bold monotones in their home fabrics, especially if the focus of the room is the abstract art. In the room below, the bright pillows accentuate the colors in the prints and plants nearby.

On the other hand, some patterned pillows will not make room too complex if the bold colors in the art are simple enough.

In both examples, wall, floor colors and big furnishings use neutral greys and beiges. The fabrics create exciting pops of color.

Geometric Shapes – As Alexander Girard mentioned above, geometric shapes satisfied the thirst for futuristic elements in the home. Different patterns can be coordinated effectively if their colors are in the same families. Also, vibrant complex geometric shapes work best if the furnishings, wall and floor coverings have simple, monochrome colors and patterns.

Repeated geometric shapes diverged drastically from the fabrics of the 19th century that depicted people and natural scenes in complete form. Instead, beauty inheres in the color combinations and the interesting shapes themselves.

Textures – The modern period across all disciplines encouraged experimentation. Just as Jackson Pollock used house paint and Verner Panton and others used plastic to make furniture, the modern fabric designers sought out unique fabrics intended to prompt the user to question the ultimate definition of fabric all together.

Textures of fabrics solved a myriad of problems. It’s during this time that the velvet or chenille accent chair became popular. Wool throws invigorated linen and cotton furniture or vice versa. Designers turned to fabric texture to to put the finishing touches on a coherent room.

Natural and New Materials – Even though driven by experimentation, Mid Century Modern fabric designers also stayed true to the standards of a movement that prioritized nature and the environment.

They helped homeowners recognize the beauty of natural materials in their raw forms, particularly wool, linen and cotton. These simple fabrics should be regarded as art in themselves. They didn’t need tassels and brocade to make them attractive.

At the same time, production of synthetic fabrics exploded in the 1950s. Manufacturers mixed natural fibers with new synthetics to create materials that repelled stains and needed less cleaning and ironing. The most synthetic fabrics, orlon and rayon, went into making clothing.

During the years of World War II, families had to go into minimal mode. The nations’ men had to be soldiers. Our factories and the metals and other materials they used went to make the tents, canons, guns the soldiers needed. Extra food shipped to the soldiers. Families sacrificed much to ensure the men came home safely.

By 1950, the soldiers had been home for five years and the economy was on an upward swing. The housing initiatives had gotten families into well-designed homes. After the gloomy, frightening war years, designers longed to add a little fun and frivolity into these homes. Several are quoted as saying they felt it was time for exciting designs and bold colors. These British and American designers still influence fabric design today.

Inspired by Mid Century Modern artists, Lucienne Day added color back to both clothing and interior accents. She explained, “I wanted the work I was doing to be seen by people and be used by people. They had been starved of interesting things for their homes in the war years, either textiles or furniture.”

While Day began by designing textiles for dresses, the Houses for People Movement stole her attention. Initiated by the Belgian Workers’ Party at the end of the 19th century, the Houses for People was a social movement that espoused all people had the right to safe, lovely homes. The Mid Century Modern architects adopted this mentality whole-heartedly as well.

While working as the principal designer for Heal’s fabrics, Day created over 70 patterns, most exhibiting energetic strokes and a spidery doodle-like style. Her skeletal leaves, spindly stems and butterflies capture the attention and buying dollar of mid century homeowners. Day also designed wallpapers, ceramics and carpets.

A contemporary of Lucienne Day, Mary White was one of the most famous and popular fabric designers of the 1950s. Most of her designs involve the flowers and plants in the English countryside where she lived. When her fabrics appeared in the HMS Queen Mary Ship and Heathrow Airport, her reputation exploded and she was able to sell her designs to Heals’ for top dollar. Today, many of her fabrics hang in renowned art and fabric museums like the Victoria and Albert Museum in London and the Warner Textile Archive in Essex.

Like so many of the Mid Century Modern designers, Alexander Girard was a Renaissance Man. A competent architect, as well as designer and artist, he was hired in 1952 by modern furniture icon Herman Miller as the head of their textile division. He kept that position until 1973, using architectural motifs in many fabrics. Hungry for a departure from the violent decades before, postwar consumers appreciated Girard’s ‘new’ ways of using pattern and color in fabric design.

Determined to bring new but affordable design to the middle classes, Terrance Conran opened his own interior decor stores in the 1960s called Habitat. In ten years, Habitat had expanded to nine branches. Like the other Mid Century Modern stand-outs, he was an architect and an artist as well.

Conran bought into the zeitgeist of the period that simple, useful homes and home decor made for stylish, comfortable living. He even went further to claim that practical pieces could be an antidote to superficial flourishes, which too often hide work that is substandard. Like Alexander Girard, he believed simplicity with a few overall flourishes sufficiently expressed personality and modern tastes.