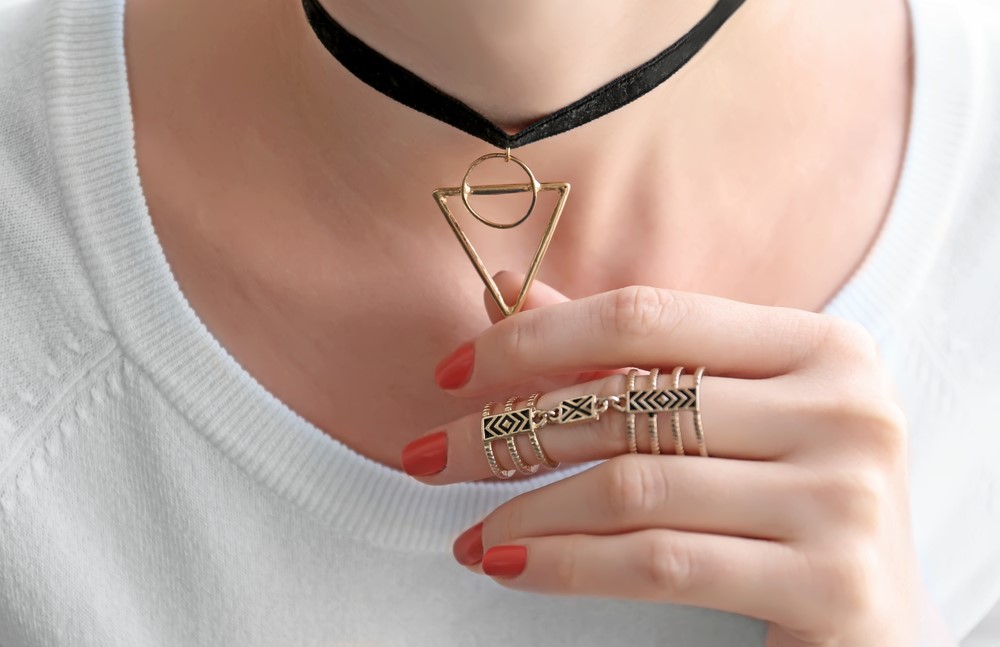 Who would have thought that an insistence on clean lines, geometric shapes and simplicity would leap from buildings and furniture to jewelry?

The same vision that drove the Mid Century Modern architects and artists captured the jewelry designers, too. The appreciation for a whole new, unadorned style caught fire as Mid Century Modern jewelry swept the upper classes in the late 1940s through the 1960s.

Margaret de Patta, Mid Century Modern jewelry pioneer, started designing jewelry in the late 1930s after learning about the Modernist artists at her program at the Art Students League in San Francisco. But with factories, materials and labor consigned to the war effort, few spent money on jewelry. While de Patta was a success, Mid Century Modern jewelry didn’t become a trend until the 1940s, after the end of World War II.

Just before, the Retro Modern era reigned with ornate designs shaped into rose gold. From 1945 onward, however, forward-thinking jewelers began crafting futuristic pieces that meshed with the Mid Century values of simplicity, natural materials and technology.

Like Mid Century architecture, furniture and accessories , strictly Modern jewelry emphasized the beauty of the shape and natural materials. It could also go into the realm of the abstract.

With the end of World War II, government programs allowed more families than ever to enjoy prosperity. Upward mobility became a reality for most. It was a new time in America and people wanted to leave the violent times of war and even poverty behind. Designers created new looks to match this new zeitgeist AND to reach their first ever mass market. Hollywood royal Joan Crawford became famous for wearing big bold jewelry with sleek, modern designs.

To improve affordability for the middle class, most of the pieces were crafted in silver, partly because of the heavy Scandinavian influence but also the Bauhaus movement, which pushed all artists to create affordable designs.

These are the biggest names in Mid Century Modern jewelry design.

Margaret de Patta – This San Diego jewelry designer started in modern design when she fashioned her own wedding ring. Her work appears in the Smithsonian Museum of Art and the Los Angeles County Museum of Art. A natural artist, but self-taught jewelry designer, she achieved stunning light refraction, image reflection, and magnification through the placement of her stones.

Alexander Calder – Interested in design since childhood, Calder initially become an engineer to earn a living. He abandoned engineering in his twenties and moved to Paris where he met Modern artist Marcel Duchamp and others emphasizing art for the masses, simplicity and natural materials. While he became most famous for his large sculptures (Le Grande Vitesse in Grand Rapids MI), he also created over 2,000 pieces of jewelry. Many reflect his fascination with the vibrant art of Africa and South America.

Calder’s dominant materials were brass, steel, ceramic, wood and glass. He rejected using solder, but joined metal with loops of wire or rivets instead. HIs pieces get hundreds of thousands of dollars at auction today.

Georg Jensen –  After starting as a knife grinder and goldsmith, Danish artist Georg Jensen found his medium: silver. Jensen longed to be a sculptor from childhood and attended the Royal Academy of Fine Arts. After graduation, his clay sculpture was well received, but he couldn’t make making a living selling large pieces.

Jensen combined his goldsmithing training and fine arts education to become a master jewelry designer.  His creations became popular and he soon opened several shops. You can find his work at the auction houses.

Harry Bertoia – A multi-talented Renaissance Man, Bertoia is most known for designing his diamond chair which we cover on the furniture page on our Midcentury.org site. He was also a prolific sculptor. He began his artistic education as a painter, but moved to teach metal-work and jewelry design at Cranbrook Academy, the mecca for aspiring artists in the 1930s and 1940s. Bertoia’s jewelry style adhered to the Mid Century standards of using repetition, natural materials and simple design.

The Time is Now to Buy Mid Century Modern Jewelry

While Mid Century furniture and lighting styles came raging back with the AMC’s popular Mad Men series, jewelry has not gotten the same attention . . . yet.

That means that there’s still time for those with moderate budgets to pick up some of these pieces either at auctions or estate sales. Knowing their basic shapes and materials will help you pick out potentially valuable pieces at yard sales and resale shops, too. One of these unusual pieces may just provoke conversation with a new friend at your next party. They’re sure to be fascinated by all you know about the subtleties Mid Century Modern values and design! 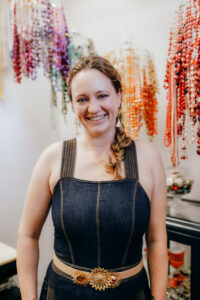 Elizabeth Clar finds great joy in mixing vintage jewelry with modern pieces and loves to share her creative passion with her clients. Elizabeth’s company, Vintage Fusion Jewelry, repurposes vintage pieces into unique statement jewelry for today. Her style is unique, colorful and bold as she brings the past into the present.
In addition to her signature cocktail rings and upcycled jewelry, Elizabeth is passionate about custom work. She takes great pride in helping clients recreate family heirloom costume jewelry into beautiful pieces that can be worn and gifted to future generations. She enjoys connecting with people and as a result, clients feel connected to her jewelry through experience, memories and the beauty in repurposed objects. 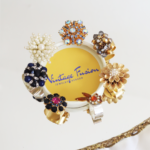