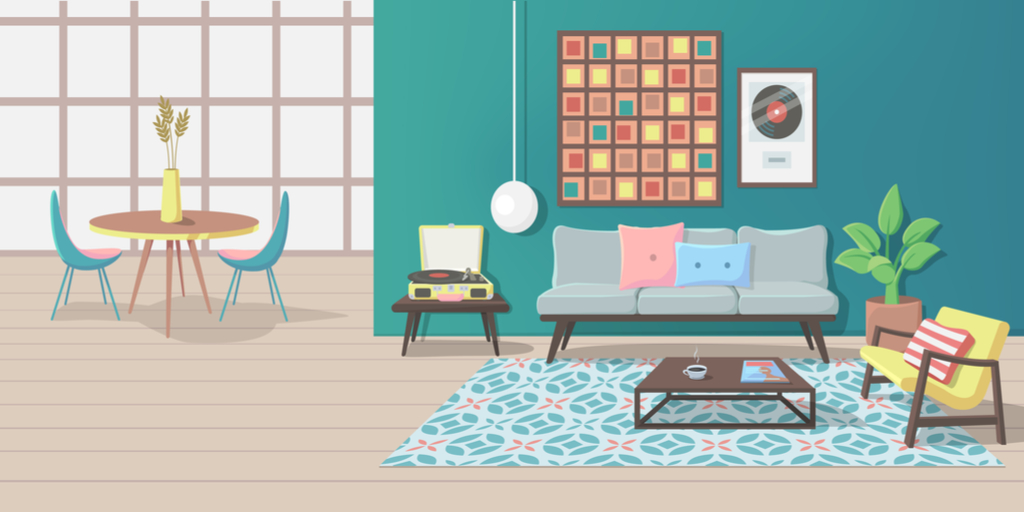 With your paint, floor and wall coverings, furniture and fabrics in place, there’s only one design goal left to conquer: impulse buys!

Mid Century Modern accessories like lamps, mirrors, clocks and ceramics express your depth, uniqueness, even your quirks. Before you head to the vintage store or auction, however, you should be aware of the range of modern pieces available today, as well as the period’s designers who may be collectible.

Pieces that retain their value are originals from the biggest Mid Century Modern interior designers like:

Reproductions will most likely depreciate, but you can buy them at a fraction of the cost of originals. Still, smart estate and yard sale shoppers can find Mid Century Modern pieces at tremendous value. Many Americans selling a relative’s items still don’t realize the importance of this period. The auction houses do, however.

No matter the designer, whenever you’re looking for Mid Century Modern, stick to clean lines, minimal flourishes, either bold or neutral colors, free-form shapes, geometric forms like globes, rectangles or cones and pattern repetition. Finally, if you’ve read our other pages, you’ll know that the designers of this period appreciated simplicity and functionality above all.

A shift in values and tastes occurred in Mid Century that got homeowners away from traditional designs that had persisted for centuries.

As we discuss on our furniture page, in the modern era, architects, designers and artists were splitting dramatically from traditional, classic styles that came before.

Where classic design emphasized massive, impressive and heavily ornamented furniture and accessories, modern standards switched to functionalism—pieces with the fewest materials designed in the most effective ways ruled the day. The beauty inhered in the natural wood, metals, fabrics and other materials. Because they found their challenge in shaping everyday items into lovely pieces, the piece’s form and natural texture became the source of the art rather than its adornments.

Finally, a key with Mid Century Modern accessories is not too many.

Modern designers believed openness and spaciousness not only made homes stylish and sophisticated but relaxed occupants. Rooms crowded with art, stiff furniture and chachkies caused stress and showed poor taste.

Instead, a Mid Century Modern room should invite occupants and their guests to sit and relax, perhaps enjoy the view to the lovely environment outside rather than that curio case full of porcelain elephants or antique swords.

Where once, every lamp in America stood on a heavy base topped with a flared lampshade, come mid-century, smooth globes, cones, cylinders and even bare bulbs appeared in homes all over the country. The goal was simplicity, after all.

The period’s popular arc lamp creates quite a statement while maximizing the space in the room. It also makes getting around the sofa easier, another nod to the modernists’ dedication to functionality.

The arc lamp emphasized the globe form, but designers experimented with spheroid (globes squashed at the poles), cones and even bare bulbs.

The lamp below by designer George Nelson lets the eye sweep easily from top to bottom while providing abundant light. Also, If you look closely, you’ll see several lamps along this wall. The decorator achieved both simplicity and repetition for this Mid Century Modern room. If you can find an authentic George Nelson piece, it most likely will appreciate in value, as he is one of the most renowned modern designers.

Another characteristic of Mid Century Modern lamps are thin bases or minimal hanging cords. Reducing materials as much as possible drives the modernists.  Our furniture page explains how, if any part of a chair wasn’t needed, it was removed. That’s how we got Eero Saarinen’s Tulip Chair with just one leg running from seat to floor. Similarly, designers whittled down their lamps to their most critical elements and even trying to make this minimalism attractive.

The modern twist on the traditional lamp also brought in repetition.

Finally, with functionality prioritized over form, many Mid Century Modern accessories, including lamps, can be manipulated to fit the situation. The modern chandelier probably has the most changeable lighting form.

The Mid Century was the time to look ahead, to change completely from recent past where two brutal world wars claimed lives and souls.

Picking up on this heartfelt desire to split from the past, designers gave homeowners a taste of a bright, high tech future. They bundled up this forward-thinking promise in their gadgets, namely, the clock. These two clocks freed the design from the limits of the clock face. Many didn’t even include numbers.

Table clocks got a redesign, too. This focus on simplicity and natural materials screams Mid Century Modern.

Mirrors are some of the best Mid Century Modern accessories because they add not only a little bling, but spaciousness. If they reflect a lovely scene outside of a window, decorators win triple Modern points. They open up a room, put a functional item central and bring even more nature inside. These functional pieces can invigorate a space by featuring sun rays, bamboo petals or arms with shapes at their tips.

Many modern mirrors come in rattan, metals, wooden frames or a combination of these. Remember how much the Mid Century Modern designers appreciated the natural beauty in natural materials.

Finally, it does seem most of the mirrors from this period are round.

By the 1950s, the Limoges and Lenox China styles were getting a run for their money from bold and brash Mid Century Modern ceramics.

The ceramic designers were just getting started with magentas, teals and canary yellow. They also put abstract and pop art designs on their dishes, cups and even their coffee pots! By the end of the 1960s, some psychedelic designs made their way onto entire tea sets.

Mid Century Modern ceramic designers had the audacity to mesh smooth outer shapes with sharp geometric patterns on the outside. The “Seventies” don’t qualify as Mid Century Modern, however.

Rose Cabot and Russel Wright are the names to look for if you are collecting. As with every other art form of the period, look for free-form shapes, bold colors, and simplicity when selecting your Mid Century Modern ceramics.

Today, nearly 70 years after official Mid Century, a Mid Century casserole dish gets $2,500 on the auction sites. A “Sci-Fi” vase estimated at $500 to $700 won $5,100.  Whether you’re an enthusiast or a serious collector, rest assured that the Mid Century Modern style is only appreciating in respect and value.